She had a list of things that needed to change about him.  He needed to be more organized, dead-line efficient, trustworthy and connected.  That’s the short list.  Since she is a nurse, she had a care-plan for each of her marital health goals and she was determined that he would be a compliant patient.

He had only one thing on his list of things she needed to change.  She needed to quit being so negative about all those things she wanted to change about him.  By the time the worst came, he lost hope in her ever being more positive; the marital health would increase exponentially, he conceded, if she would just be less negative.

Paul’s instructions to wives, husbands, children, fathers, slaves and masters in the Letter to the Colossians begins with this: “And whatever you do, whether in word or deed, do it all in the name of the Lord Jesus, giving thanks to God the Father through him” (3:17).

The pursuit of a whole, healthy, holy relationship begins, not with the adjustments of a spouse, but with the commitment to a mindset; the mindset that everything done will be done because Jesus wants it done.  Any growth starts inside the mind and heart of a husband or wife.  Moreover, since the motivation is about what Jesus wants, then, no less-than-desirable response from the other spouse changes the behavior.  After all, it’s not about them; it’s about Jesus.

Someone asked leadership guru Zig Ziglar about marrying the wrong person and he replied with this:

Choose your mindset. Your mindset will guide your behavior and that will create renewed feelings about your spouse and your marriage.

We tried the experiment of developing a strong relationship by getting the other spouse to behave like we wanted.  It was a failed experiment.  It was an outside-in attempt.  Start in your mind and heart. Decide you will be who you ought to be regardless of the behavior of your spouse. For us, “being the right person” means doing what Jesus wants. Do everything, including marriage, in the name of the Lord Jesus, giving thanks to the Father. 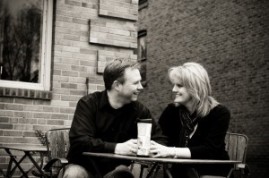 Richard May and his wife JeannaLynn together run WGHJ Ministries: a full-service, spiritually focused marriage mission center with international impact by coaching couples, supporting couples in ministry, and providing marriage related resources for churches, universities, organizations, and communities. You can get more information on their website: www.WGHJministries.com; or follow their Facebook page: https://www.facebook.com/WGHJMinistries.

As part of our Summer Blog Tour you can win a copy of Tim Archer’s newly  released book and accompanying workbook Church Inside Out by leaving a comment on this page and then completing the form over HERE.